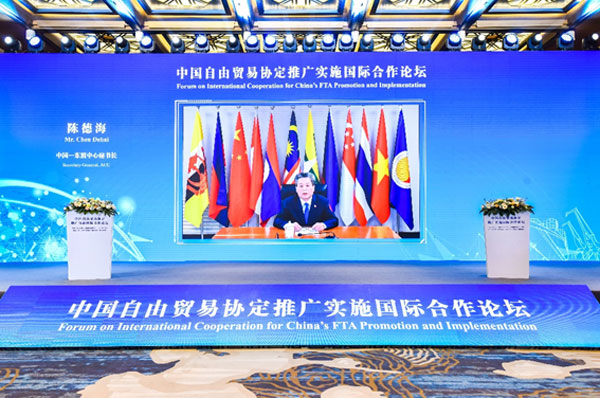 On 22 December 2021, co-hosted by the China Council for the Promotion of International Trade (CCPIT) and the Guangxi Zhuang Autonomous Region Government, the Forum on International Cooperation for China’s Free Trade Agreement (FTA) Promotion and Implementation was held in Nanning. 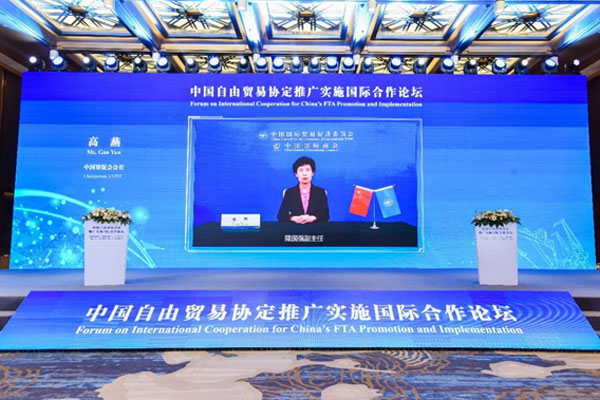 Ms. Gao Yan pointed out that FTA has become an important force in the world trading system which is conducive to boosting trade and investment facilitation for China and other countries and regions related. All countries should practice multilateralism and deepen bilateral, multilateral and regional cooperation to further share development achievements and market opportunities, and jointly build an open world economy.

Mr. Liu Hongwu said that Guangxi is making every effort to expand high-level opening-up and enhance cooperation with RCEP member states, especially with the Southeast Asian countries. The province is taking the promotion of the implementation of China’s FTA as an opportunity to deepen opening-up and cooperation and accelerate the building of an opening and cooperation platform oriented to ASEAN and better serving the Belt and Road Initiative, so as to achieve mutual benefit and win-win results. Mr. Chen Dehai said the ASEAN-China Free Trade Area (ACFTA) is the first FTA co-established by China and foreign countries. It is also the largest of its kind among developing countries that has been completed and upgraded so far. The upcoming RCEP will generate greater endogenous impetus for regional countries and promote long-term prosperity and sustainable development in the region. Under the new circumstances, ASEAN and China should fully implement the important consensus reached by the leaders of the two sides, and promote high-level regional economic integration for mutual benefit and sustainable growth.

Participants believed that although the negotiations in relevant areas of the WTO are still deadlocked, the number of FTAs between countries and regions is increasing. By leveraging comparative strengths, bilateral, multilateral and regional FTAs are all important tools for promoting international economic and trade exchanges. With China’s firm support and full cooperation among countries across the world, new and greater achievements will be made in the multilateral trading system and FTAs at all levels. The forum was held online and offline with the theme of “Work Together to Promote FTA Cooperation, Map out A Blueprint for Regional Development.” Guests held exchanges and discussions on promoting high-level opening-up, high-quality growth of trade in services, innovation and development of digital economy and the utilisation of FTAs, with focuses on opening-up and cooperation, mutual benefit and win-win results, regional economic integration and recovery of world economy.

During the forum, several documents and publications were released including the Nanning Initiative on International Cooperation for China’s FTA Promotion and Implementation, a total of 16 Guide on FTA Application and the Guide on the Business Environment of Countries (Regions) for Chinese Investors pertaining to 24 countries.